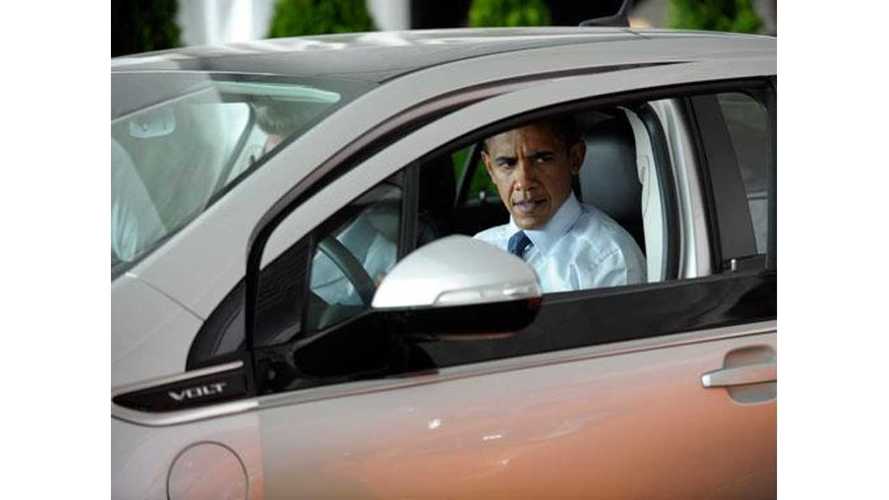 CBS is known for being the more "fair and balanced" of the major network news organizations.  After all, this is the network that had Walter Cronkite and Dan Rather behind the desk, so we were a little surprised to see a FOX-esque piece on electric vehicle adoption.  More specifically, the Obama administration's pledge in 2010 to 'augment' market demand in order to achieve 1,000,000 EVs on the road by the end of 2015, and thereby start to ease the country's addiction to oil.

"We can replace our dependence on oil with biofuels and become the first country to have a million electric vehicles on the road by 2015," President Obama said in a press conference in January of 2011.

Now, we are the first to acknowledge that 1,000,000 EVs on the roads by 2016 was a wildly optimistic goal, and there is little to no shot (and never was) at actually achieving this number. The first clue that a government program is not going to achieve 100% success is that the intended result does not fall within the current administration's election cycle.  Case in point.

However, CBS reporter Sharyl Attkisson clearly started with the premise in midde that the program was a failure, and then attempted to work "the facts" backwards to support her position.  Something we try very hard not to do here at InsideEVs, although we confess it is tempting at times.

The CBS News investigative correspondent rightly points out some of the early failings behind a few of the electric car automakers.

From these early missed estimates and failures, CBS goes on to draw the conclusion that only 310,663 electric vehicles will be sold by the end of 2015, and that the "effort has, in part, stalled." CBS provided the below graphic to dramatically illustrate their point (along with their own estimates interjected):

Looking at the chart, we could debate the numbers. Chevrolet will clearly sell more than 10,000 Volts this year, and 15,00 a year going forward. Ford has already passed the "zero" sold level for 2012 on the Focus, and the Fisker Atlantic will sell in a total volume greater than 20,000 by 2016 if they stay afloat. However, this is only the finer minutiae of the argument.

Photo Op With the US-Made For Europe, Opel Ampera

The failing of the chart, the analyst, and her conclusions, is that the intent behind the 2.4 billion ATVML program, coupled with the $7,500 federal credit system has indeed been achieved, and the adoption of electric vehicles has not stalled.  Rather, it has been a huge success.

Sure, these 11 vehicles (produced by these 7 automakers) that were known at the end of 2009 for the DoE to overestimate on will not sell 1 million copies. Not even close.  And some of those 11 were obvious failures, but the program was not. It has spawned an entire industry; and what was 11 electric vehicles heading into production before the end of 2015 is now well over 30.

So sure, the Th!nk City is never going to happen, but the BMW i3 will. Ford's planned 4,200 Transit Connects will never see the light of day, but the Toyota RAV4 and Honda Fit EV will. The Chevrolet Volt is not going to be the runaway hit that it was expected to be, but it looks like the Plug-In Prius and Spark EV are going to pick up a lot of that slack.  In total, the new models, are expected to have sales of over 250,000 units by 2016, and there is no telling what else might be on the way that could further add to that number.

In response to CBS' myopic view, the Energy Department's David Sandalow said, "Well, let's hope that we can move faster. And if we don't hit that goal in 2015, let's hit it in 2016."

That is hitting the nail on the head Dave. Who cares if the program is a year late in hitting 1,000,000 electric vehicles on the road? That is semantics.  The main thing is that it worked. The electric vehicle industry is here today, and it is here to stay...and for once, we can thank the government for something.

(Original CBS report can be found Here...well actually, since going to press it has been re-written/edited several times to correct factual errors that commenters are only too happy to point out)