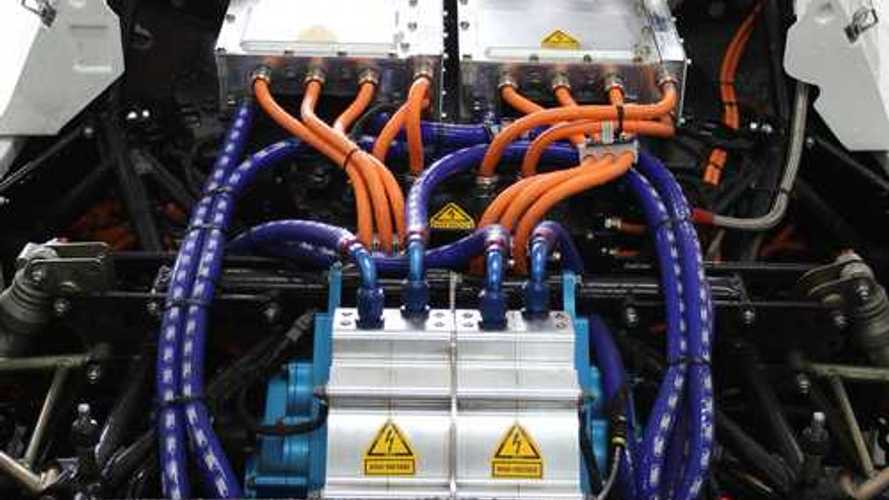 Toyota announced it will be fielding an entry in the electric division of the 2012 Pike’s Peak Hill Climb.  The Toyota Motor Group EV P002 will be driven by Japanese rally champion Fumio Nutahara.

Last year only two “competitors” vied for the summit in the electric division of the Pike’s Peak Hill Climb.  Ikuo Hanawa driving the highly customized, Yokohama sponsored Custom Summit HER-02, and Chad Hord driving a stock Nissan Leaf.  At this point seven cars are entered for the 2012 electric class.

Hord drove a mostly stock Leaf up in very respectable time of 14 minutes and 33 seconds, setting the inaugural record for the new Electric Production Class, and beating a number of the slower gassers in the process.

If the Summit HER-02 is coming with the same 268 horsepower as last year, it may find itself a distant second to the roughly 470 horsepower provided by theTMG EV P002, which appears from pictures to be powered by a pair of EVO axial flux motors.  Last years, top gas vehicle was rated at 900 horsepower .

Mitsubishi is fielding two cars.  A heavily modified version that uses all the power train components from the standard iMiev, and a standard iMiev that has a more aero front and the required safety equipment.

Nissan reported that the Leaf finished with 3 bars left after last year’s race.  Assuming a usable battery pack portion of 21.4 kWh, this would suggest the Leaf burned through roughly 13-15 kWh last year.  If accurate it would mean that the Volt would not be able to do the run on electricity only and the iMiev will be right at the limit of its 16 kWh battery to complete the race.  A Focus Electric would appear capable, but no word from Ford on participation.  Despite last year's sucessful run, Nissan has not yet signed up to run again.