Power Your Home With Your Car? Toyota Says Yes 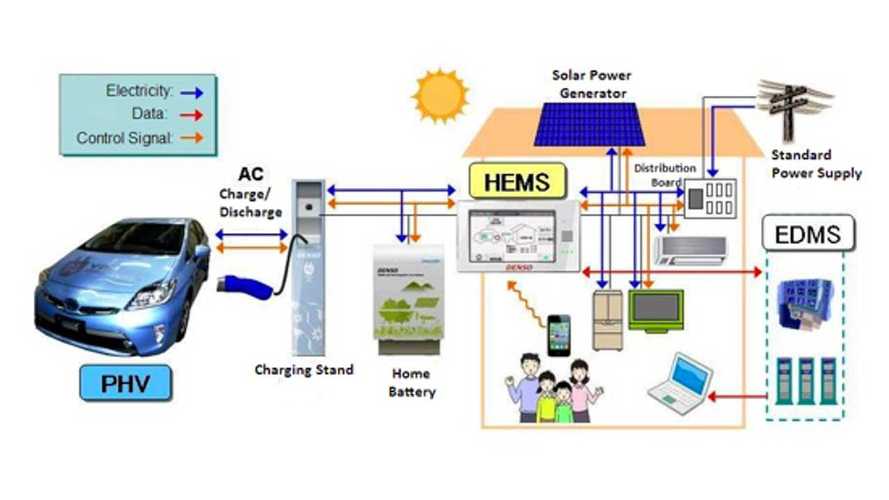 A news release this morning announces that Toyota will be begin testing a “system for the mutual sharing of power between electric-powered vehicles, such as plug-in hybrid vehicles (PHVs) and electric vehicles (EVs), and homes.” Nissan has previously announced such a system for use with the Leaf, but Toyota’s use of the Plug-In Prius for this test is the first from a major automaker to use the vehicle's gas engine to generate electricity for use as emergency power at home.

With a fully charged battery and full tank of gasoline, a Prius PHV can supply power for average Japanese household electricity use (approximately 10 kWh) for four days.

Often in the aftermath of disaster comes great learning and urgency of the need to prepare for the future. In the wake of the devastating Tsumani and continuing power generation problems facing Japan, their automakers are looking very closely at using the vehicle as a source of power in emergency situations, but also as way to smooth out peak demand on the grid. While many EV critics are suggesting power grids can not handle EV charging demands, the car makers and utilities are realizing that not only is the grid more than capable of charging millions of vehicles in the evening, but those same EVs with their massive batteries offer exciting possibilities for using power generated off peak at night to meet on peak demand during the day.

For those who have not recently lived through a weather disaster this news is something of a yawner, but for those who are not long removed from prolonged periods without power following a weather event, the thought of using a vehicle to supply electricity in times of emergency is very appealing.

Automated whole house back up systems start around $10k and can rise rapidly. Beyond the expense, the generators used in such systems are no where near as quiet, durable or as efficient as engines used in cars which are much more thoroughly engineered and tested, before getting the green light for mass production.

Another key advantage an EV based power generation system would offer is the ability to use the battery to buffer peak power demands on the engine itself. At start up compressors on HVAC systems and refrigerators can require 3 to 5 times their running amperage. This means a compressor requiring 30 amps to run, might pull down 90 to 150 amps at start up. Sizing a generator capable of handling that load would be prohibitively expensive, but if you can use a battery to meet that brief peak demand, then a much smaller generator can be used for steady state needs.

Whole house back up, and grid peak demand supply look very likely to be the killer app for EVs, and the first automaker to develop a viable system will have a strong competitive advantage.