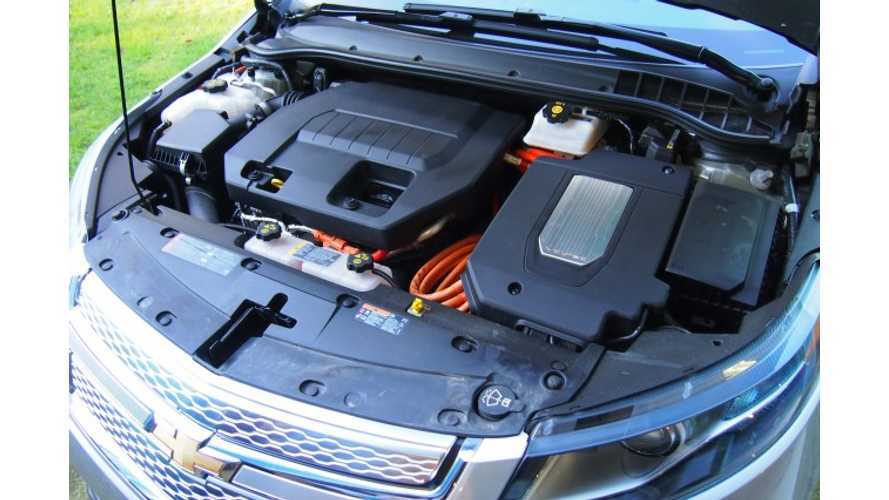 All we had known for sure about the future of the Chevrolet Volt was that it will be undergoing a powertrain upgrade in about a year's time.  That is until now.   A source inside the company (who did not wish to be identified) apparently confirmed to InsideEVs that the 83 hp, 1.4L engine that is currently in use as an extended range generator for the Volt will not be in the 2014 model year that begins production in the summer of 2013.

It is thought that the 1.4L engine found in the Volt today was never the first choice of engineers who were designing the car, but was mated to the platform strictly out of the availability of the engine.  When debuting the concept Volt, GM had envisioned a specially designed engine to optimize performance for the Volt, but had to abandon any such plan because of a freeze on all research and development in the period where GM was entering bankruptcy, and the Volt was in development.

When asked about what the replacement engine might be, it was said that apparently a new 2.0L turbo has been thoroughly vetted on the platform, and will most likely see its way into production of the Volt (and upcoming Cadillac ELR).  This is the same engine that GM has recently confirmed will also find a home in the Buick Verano, a car which incidently rides on the same Delta II platfrom as the Volt.   The output of the 2.0L turbo currently ranges from 220hp to 270hp.

UPDATE (01/14/2013):  A new ICE engine (just a new electric motor) did not materialize as GM announced the 2014 Cadillac ELR today.  This new engine/powertrain may have been pushed back to the generational update for MY 2015)

This new engine would not only give the Volt and Ampera a more capable engine, but will allow the all new ELR (which will built on the same platform), to perform more inline with its sporty appearance, and the expectations of the Cadillac brand in general.

Mike Anderson, who is Global Chief engineer for Ecotec engines at GM said of this motor, which is found inside the Buick Regal GS, “Our continuously variable valve timing is tuned to work in tandem with direct injection and twin scroll turbocharging to achieve optimum fuel economy, lower emissions, and instant performance when needed. Having 295 lb-ft (400 Nm) of torque available over a wide range of engine speeds makes for a very exciting driving experience.”

As for the fate of the current electric drive unit (149 hp/273 lb.-ft. of torque) that actually drives the current Volt wheels, our insider had no knowledge of any future decisions by GM. However, one assumes if the 1.4L is out for a much larger engine, that the electric motor has to go as well.

Ecotec 2.0L Turbo: One of the “10 Best Engines” Award by WardsAuto World

GM officials would not confirm or deny the inside information InsideEVs has obtained.   "Unfortunately, we do not comment on future product details," said GM spokesperson Kevin Kelly, "so I cannot provide any information related to your inquiry."

The 2013 Volt will not have these engine changes, but as we reported previously the battery pack has been tweaked to squeeze out an additional 3 miles of range.  There will also be an optional rear seat arm rest, a real time energy use dashboard display, and replacement of the dark colored rear hatch door and roof panels by body paint.  There will also be an additional two optional paint colors.