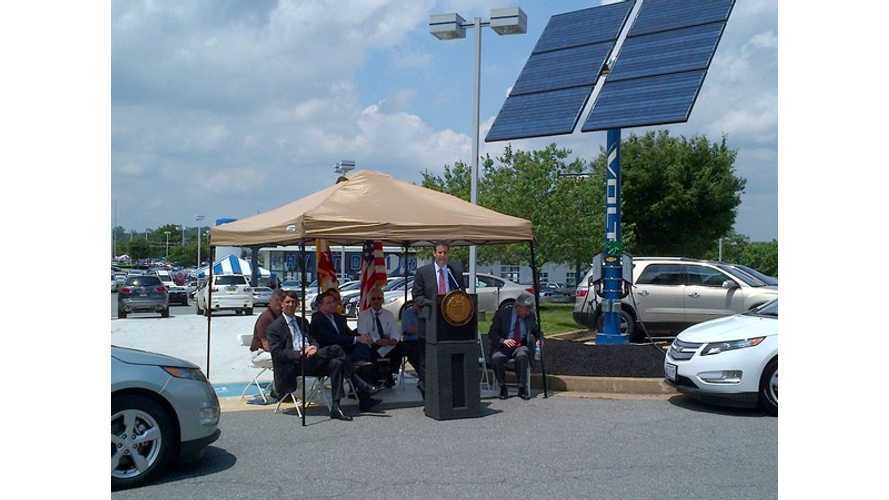 For anyone who has thought about having a solar charging system to power their electric vehicle but knew they did not have enough room, or the right exposure, Advanced Technology and Research Corporation has a solution for you.

Their solar charging system uses only six solar panels that are then mounted on an 18-foot pole.  But to further increase efficiency, the panels also use GPS technology to track the movements of the sun.  This "axis tracking" will increase the power collection by over 30% , while not increasing the footprint needed.   Think of the six panels as really nine traditionally mounted panels.

And what better way to show off the system by actually putting it into service on the ground?    Starting this past Tuesday, Win Kelly Chevrolet, in Clarkesville, Maryland, had one of the first EV dedicated system installed at their dealership, and then had a little "kick off" celebration by charging up one of their new Chevy Volts.

“ owners are making an important and strongly eco-friendly choice by buying electric vehicles in the first place,” said Rob Lundahl, ATR’s VP for energy and automation said to the ColumbiaPatch. “And these same eco-minded values are going to influence their choices of where they refuel their cars, shop, go out to eat and stay overnight. EV charging stations will be the least this new and growing class of consumer will look for.”

The system/L2 charger can fill up a Volt in about four hours, a Nissan Leaf in about seven, partially by the sun.  When not plugged into an electric vehicle, the solar array can be used to send unused electricity back into the grid.  Initial cost on the unit is about $23,000, but the company says that as production grows into the "hundreds and thousands" the cost will come down.

The array itself is rated at 1,410 watts, and is expected (in a normalized location) to produce about 7.5 kWh per day.