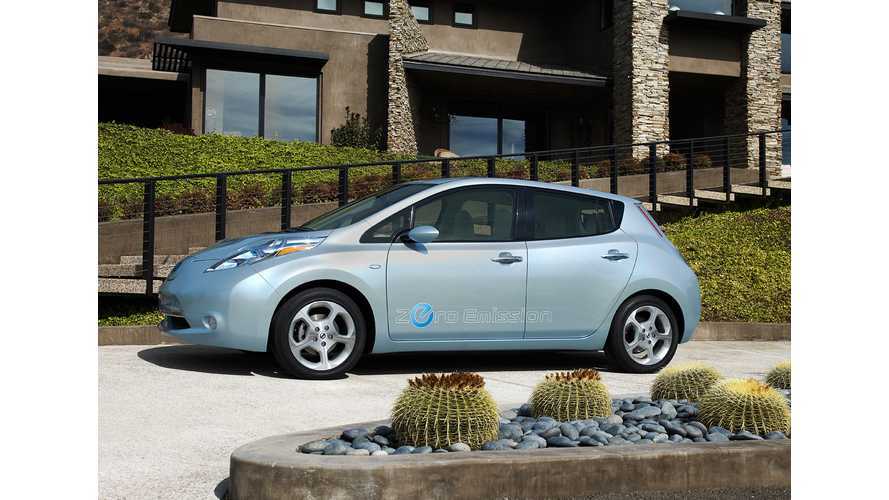 The Volt and the Focus Electric both feature active liquid heating/cooling loops to maintain optimum battery temperature. The Nissan Leaf uses only air cooling to keep the traction battery from overheating. Some were surprised at this decision and Nissan has been questioned sharply about it, but Nissan has insisted that air cooling is sufficient for the climate of the United States. Now come indications that some Leaf owners on MyNissanLeaf.com are seeing significant battery capacity degradation, within the first year of ownership.

LEAFfan from the Phoenix Area responded:

There appear to be several people who are reporting significant capacity loss within the first year. To be clear.  This is a very small number but as some posters have noted there could be others who may not even realize that they have lost capacity in part because of the erratic nature of the battery gauge and range estimate, which even Leaf owners who adore the car are calling the Guessometer.

Undoubtedly there are other people who are aware of capacity loss but are not posting about their experience so it is difficult to gauge how wide spread the problem may be. The post above suggests that the dealer has faced this issue before.

YOU CALL THAT A WARRANTY?

Nissan’s warranty stipulates only that the battery will deliver energy sufficient for the motor to achieve peak power. Critically, they do not stipulate for how long the battery will do this. Nissan uses the language that they warranty power performance, not battery capacity. I think it is fair to say such a warranty is worthless as far as range of the Leaf is concerned.

So predictably another poster who had complained to Nissan of a capacity loss that was between 12% and 20% in the first nine months, received a response from Nissan engineers that stipulated that the loss was normal. The owner was less than pleased.

GM by contrast guarantees at least 70% of the original range through year 8. No word from Ford on what exactly their warranty is guaranteeing.

You are the first on-forum report of a Loss of a Capacity Bar, I believe.

Down 15% is ... disturbing to see it happen after just 14 months, but you MIGHT have started with a low-capacity battery?

would be a handy thing for us all.

This was typical of many which suggested that Leaf owners have their battery evaluated using a state of charge meter, either before or shortly after purchase, and to monitor it periodically to document any capacity loss. Towards this end, some users appear to be getting more accurate battery capacity information through the ODB port, and two devices appear to be in development to address this need. The Gidometer and the Leafscan. Frankly it is not clear to me what the point of documenting capacity loss would be since Nissan makes it clear they do not warranty capacity loss

KMP647 even went so far as to suggest:

Heat and high soc. not good these batteries.  We will see most battery issues in these warmest states, downside to the Leaf pack design.  If I lived in Phoenix. I would buy a focus or a volt.  Its very possible the battery was on the low end of the scale from the factory, no way to know unless you plug a GID meter into your Leaf when its new.

High heat and a high state of charge are key risk factors for capacity loss. And here again Nissan seems to have been less than cautious by allowing owners to charge to what it terms “100%.” What the actual SOC level that represents remains the subject of debate, but clearly it is a level that is sufficiently high that Nissan discourages its daily use and stipulates that capacity will be lost if it used daily. GM by contrast places no such restrictions on Volt owners because they protect the battery by only using 65% of its capacity. Statements from Ford make it appear that the Focus Electric will use about 85% of the capacity of its 23kwh battery.

A number of posters expressed a decrease in faith with Nissan for not providing a better warranty and for failing to address the concerns of those who have experienced significant capacity loss, while others owners worried what effect it would have on sales if people found out there have been problems and Nissan’s response has been “this is normal.” Other owners strongly questioned the charging, driving and vehicle storage habits of those posting with capacity loss. Implying that those who had lost capacity were themselves to blame.

Hopefully the number effected is very small, but that will be of little comfort for those caught by early capacity loss.