Yesterday Forbes published an article about a Chevrolet dealer who is selling 25 Volts a month.  This sort of blows every other Volt dealer out of the water.  Most are not selling that many in a year or two.  This dealer, of course, is making a seriously concerted effort to do that.  It isn't just happening by accident.

Ford and GM are at a distinct disadvantage to the Nissans and Toyotas of the world in this regard because the domestic dealers have much more leverage than their foreign counterparts.  GM used its bankruptcy to get better deals out of the UAW, and Ford did the same in its "near bankruptcy" of 2006.  While they managed to chop some brands and domestic dealers, the existing dealer relationship remains virtually intact.

Which means Ford and GM, can beg, plead, threaten and bully as much as they want, but basically each dealer decides for herself which cars they will and will not emphasize.  Any particular dealer's enthusiasm for a particular car will certainly impact the sales and the customer experience and satisfaction with that car.  Ron Kody the owner of Richmond Ford Lincoln was on hand and asking questions of the Ford people that left me with the distinct impression that he is personally enthused about EVs.  This bodes well for EV sales in the Richmond area.

Let me just preface my remarks by saying that one 15 minute test drive is not nearly enough to establish definitive opinions.  That said, if the Volt, Leaf and Focus Electric were entered into a beauty pageant, on looks the Focus would be the winner, with the Volt a close second and every one would be thinking "that Leaf  better have one heck of a talent."

When you see a car in pictures and you see it in person the first time there is always a little deviation in reality from the impression the pictures make upon you.  For me it was how the front of the Focus Electric looks absolutely refined in person.   The face of this car is just very pleasing.  It is no wonder Alan Mulally was compelled to do this: 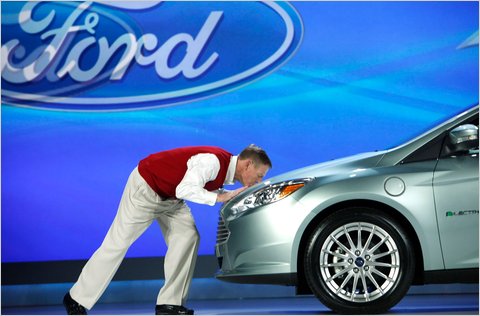 Alan Mulally laying a big wet one on the Focus Electric.  Get a room!

The acceleration was in line with the Volt and Leaf.  Recall that the Leaf actually is faster off the line than the Volt, but the Volt beats it to 60.  Can you believe I didn't stomp on the Focus Electric once from a stand still?  So busy just trying to absorb everything I could about it.  What a novice.  Merging onto the highway I did step on it smartly and was pleasantly surprised at how well it accelerated.  Eric commented that Ford had worked specifically to "tune the mid-range acceleration performance."  Acceleration is close enough amongst these three that it will not be a major factor in the buying decision.

One thing I noted right off the bat is that the regen level on "D" mode is noticeably heavier than on the Volt.  I would put it halfway between D and L on the Volt.  I would like it to be less, in fact I would like to be able to choose to have no regen until I press the brake pedal.  Eric tells me what I want is more "sailing." One can sort of do this by shifting from D to N, but I don't like to play with the shifter that much.  Eric points out that their feedback suggests that many people like heavy regen.  There is no doubt that  people out there like heavy regen, in fact many drive in L on the Volt, and are able to effectively drive with one foot in heavy stop and go traffic.

GM, Ford and Nissan have put this auto "regen" in place not because it is the most efficient way to drive, but because people are used to the feeling of a car noticeably slowing down when we lift off the accelerator.  Gas cars do this mainly because their brakes  are always slightly engaged and because of friction in the engine and transmission.  In an EV the only thing that need be slowing the car down are air resistance and rolling resistance.

Found the handling to be good, but again a 15 minute test drive is too short to form definitive thoughts.  My suspicion is that the Focus will slot in as better than the Leaf but not as good as the Volt on handling.  The Volt will be hard to beat because you and the battery sit lower in the car, but of course the trade off is that the lower your seat the harder it is getting in and out, and visibility gets compromised.

The charge port opens by pressing the indent in the cover.  The cover then pivots clockwise to reveal the charge port.  To close you simply press then indent and the cover closes back.  Slick.  In theory I find this solution preferable to pressing an interior button.  More often than I like, I press the charge door release button on the Volt,  get out and close the door only to discover the charge port did not actually open.   Its either back into the car or fish around in my pocket for the button on the key FOB.  Also, having a charge port that pivots instead of swinging out could be important for people who are pluging and unpluging in the tight confines of a garage.

Speaking of key FOBs.  On the Focus Electric each key FOB can be tied to an individual driver.  This could be useful for many reasons, but in the Lee house it will help resolve a running dispute.  My dear wife labors under the delusion that she is a more efficient driver than I.  Didn't have the heart to set her straight myself.  But now on the Focus Electric, with each of us having our own performance monitored through unique key FOBs, it will be the Focus Electric telling her that's she just been beat like a rented mule.  I will have the decency to wait until she leaves the room before doing my happy dance.

ARE WE CHARGED YET?

I gave Eric the scenario of charging at the in-laws house where the power from the receptacle is not reliable, and I therefore will look out the window and can easily spot that charging indicator on the dash.  On the Focus you are out of luck if the charge port doesn't happen to be on the side facing you.  Eric correctly points that you can set the Focus up to send you text alerts if the charging is interrupted.  As my cell phone is ever at my hip this IS a decidedly better solution than looking out the window.

However, I maintain on top of the dash is the better solution for charge indicators.  Here's the scenario.  Several times walking through the garage to go upstairs I happened to glance over at the Volt and notice the charge indicator NOT glowing, prompting me to discover that the Volt had not been plugged in.  You won't get a "charge interrupted" text if you never plug it in to begin with.  While my cell phone is married to my hip, many people are not this way, of course the smart phone tied to the hip crowd is exactly who Ford is targeting here.

Glad to see  Ford has addressed making charge level indication visible from the exterior.  Just not clear to me that the driver's side front quater panel is the ideal location for that, but it is a step better than the Volt.   On the Volt you have to  actually walk to the car open the driver's door and it will flash up the state of charge on the instrument panel.

Of course you can look this info up on a cell phone but it is sllllloooooooowwwwww on OnStar.  Hopefully Ford's apps run faster than the Onstar offering.  Unfortunately, a 15 minute test ride did not permit experimentation with the extensive technology inside the car.  On paper, if Ford has executed that tech well, then the Focus definitely sets the bar higher than the Volt, with the Leaf a distant also ran.

The Leaf  offers three indicators lights on the dash which when illuminated indicated a charge level of 0-3, 4-8, or 9-12.  Yes, the Leaf divides the battery into 12 units for reasons that no one can figure out.  Personally I like the idea of a single light that changes color from Red, Orange, Yellow to Green to indicate 25,50,75, and 100% levels.

JUNK IN THE TRUNK

As has been noted, the cargo area is compromised by the upper battery box.  There is a nifty cargo organizer back there.  If you carry nick nacks back there it would be handy to keep them from rolling around in the boot.   For a house with kids toting around bat bags, and soccer bags, and chairs in bags, I can see the cargo organizer being jettisoned for more space right from the start.

The space in the Focus Electric is comparable to the Leaf's, but the Volt is the big winner here.  The utility of its cargo space is much greater.

MONEY WHERE YOUR MOUTH IS?

There is nothing that jumps out as objectionable on the Focus Electric and at first blush it appears competent in every regard.  Of the mainstream EVs it is the looker, if Ford backs that up with good execution on tech inside the car, they will clearly have a winner on their hands.  I remain very pleased to have a deposit down on the Focus Electric.