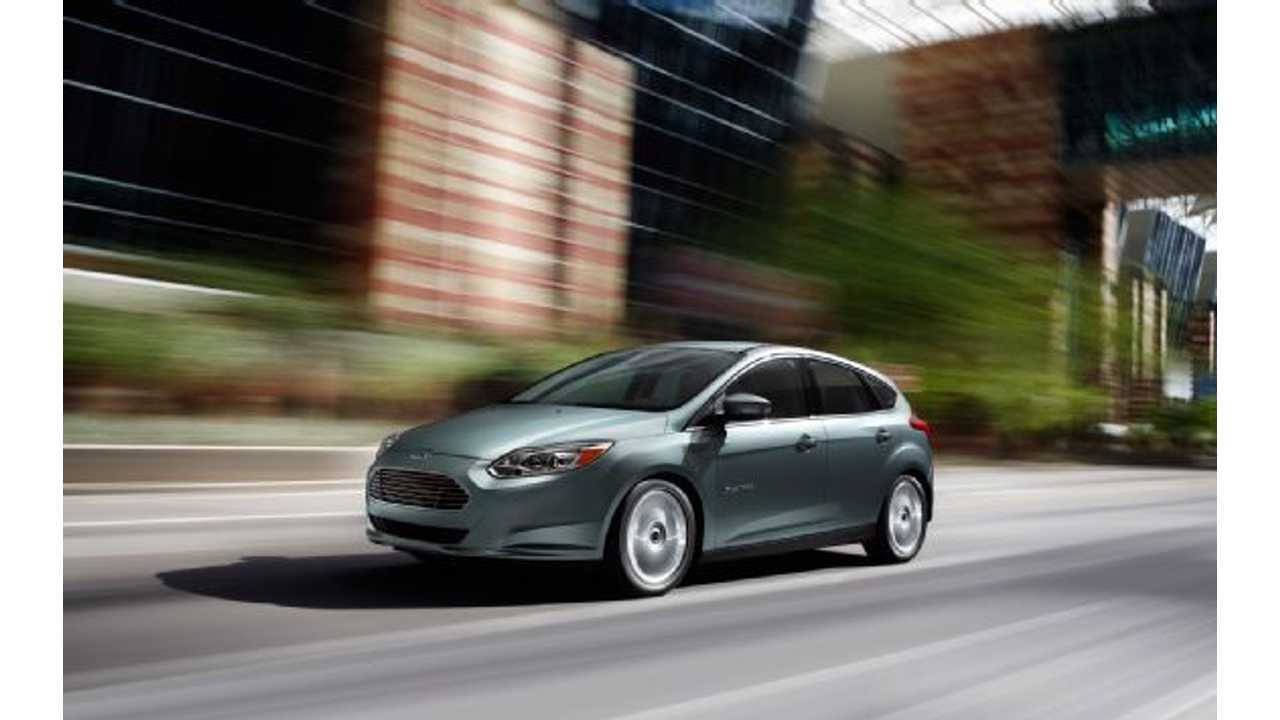 Having read 20 plus reviews of the Focus Electric at this point, if you are only going to read one review, this is the one.  Kim Reynolds does an excellent job of honing in on what will be the critical differences for most.

I stood back and watched our little tribe of auto journalists attempt to engage Alan Mulally in the question of whether the 2012 Ford Focus EV is really just a technical necessity to meet California's pending zero-emissions mandate, or whether the Blue Oval actually wants to build this car. Well, the legendary "60 Minutes" attack dog might have laid a glove on the charismatic Ford Motor Company president, but Mr. Mulally is too good for mere car scribes. His charm quickly drained the fight out them -- and left me wondering if I shouldn't ask for a red sweater vest for father's day.

The low production numbers, and exclusive use of inexpensive social media to advertise the Focus Electric have many questioning Ford's commitment to the car.  One month ago, I was among them.  But watching the well coordinated and slick rollout to journalists in San Fran and NYC, with other social media efforts has me drinking the Blue Oval Kool Aid.  Which is to say I believe Ford stands ready to build and deliver as many EVs as customers will order.

The actual difference between the Leaf's and Focus' ranges and MPGes is probably indistinguishable in the vagaries of real-world driving, but give the Ford the technical nod for squeezing a little more from a little less battery pack.

We have to give props to Ford for getting slightly better efficiency and range, but in the end these numbers are close enough that this is not what distinguishes the cars.

Where the Leaf batteries are subtly tucked beneath its front and rear seats, the Focus' are split between the gas tank's former location and a boxy intrusion in the trunk that really messes up trunk volume and the ability to load larger objects with the back seats folded.  And not only is the Leaf's battery better integrated, but it rear passenger space - particularly legroom - is more generous as well.

Again on the money.  The intrusion in the cargo space on the Focus Electric may be a serious issue for some customers.  The beauty of a hatchback is the ability to fold down the rear seats and throw a bike back there or other equipment.  Having a battery hump running through the middle of that space kills that.

The Leaf back seats do seem more generous, but I don't think there is much difference there.  I think mostly there is a feeling of more space because there is visibly more head room in the Leaf.  Strangely the specs indicate less leg room for the Leaf, but this simply does not fit with the reality.

When you've reached the end of the Leaf's range, its recharging is so slow, you'd either better be at home for the night or just arrived at a job with a 240-volt charger handy. However, with the Focus, I can imagine a pit stop along the way for, say, shopping and simultaneously getting a useful boost in range from a public ChargePoint station.

The faster recharging capability of the Focus is a big deal, but one Nissan will soon eliminate with an upgraded charger option on the 2013 Nissan Leaf.  How much this option sets you back remains to be seen.  The DC quick charge on the Leaf at this point for most users is something that will rarely, if ever be used.  There will be users for whom it is important, but for 90% plus it won't be feasible or economical to do so.

Open the hood and what you'll see isn't that motor but thick, soft rubber cover the whole thing. Riding in the cabin, you understand why it's there. It's quiet. Indeed, Ford actually discussed how it was striving to remove the subtle high frequency sounds that some have noticed in other EV's, and I have described as disturbing (after a while) in the Leaf.

Very few people have complained about the whine that electric motors make.  My experience is that if the radio or fan is running you cannot hear it at all.  Only with these things off and really straining to hear can I even pick it up.  Highly unlikely that this will be of significance for most people.

Despite the Focus EV's 700 lbs of added weight (blame the battery), I'd say this is the best-driving Focus I've experienced. No, certainly not the nimblest or fastest-cornering, but the best relative to how most people actually drive.  That weight profoundly improves its ride quality, giving it an impression of solidity that's noticeably greater than its gasoline version.

The specs I  see indicate the Focus Electric is only about 300 lbs. heavier.  Significant, but not 700 lbs.  Interesting to see she finds the ride more compelling than even the well received Focus gasser for "how most people actually drive."
MT managed to get some info on 0-60 time for the Focus Electric.  "Sub 10 seconds."   Which implies to me 9.9.  Not great, but passable.  And as noted in other reviews 0-30 capability is strong enough to bust a lane change from a stop light standstill if need be.

Back in the days of Henry Ford, his wife, Clara, rather embarrassingly avoided her husband's products because she preferred to drive a Detroit Electric battery-powered car. It took a century, but the Ford Motor Company has finally gotten around to fixing that oversight.

Nice reference to Ford's history with electric vehicles and a nod to the compelling EV Ford has achieved in the Focus Electric.