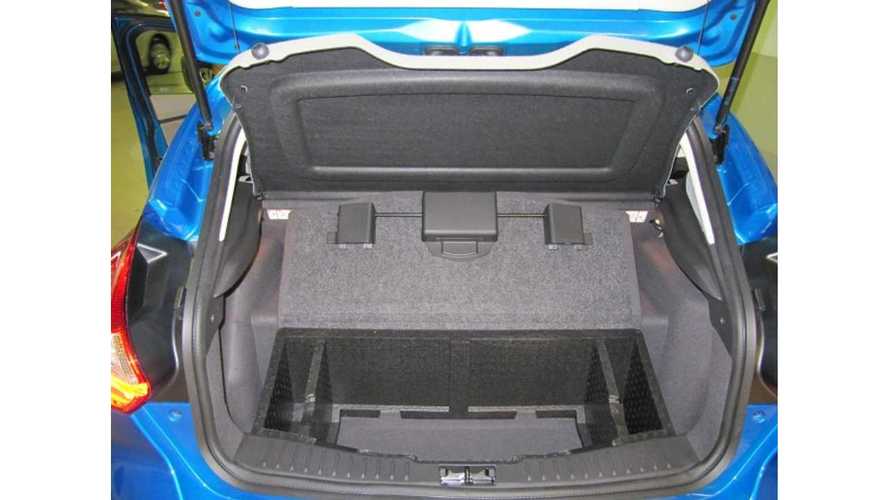 A quick look at some of the reviews the Focus Electric has been receiving, with some of the key take away thoughts.

While the dynamic performance of Ford's first-ever electric car can best be described as adequate, Ford has done a superior job of integrating electric propulsion into a normal package. In other words, the Focus Electric doesn't look like a previously undiscovered larva scraped from beneath a thick mat of rainforest duff.

The cabin is anything but cramped, there's great outward visibility, and a comfortable driving position is achieved before we pull away on our test drive. The motor yanks us happily along in suburban traffic. This tester is so quiet that we realize how much a normal car suppresses unavoidable tire noise and wind rush, which here seem more prominent in the absence of a gas engine's mutterings and sputterings.

If anything surprises, it's this newbie's level of refinement. Imagine a space vehicle that shrugs off passage through a dense belt of asteroids as no big deal. We can only picture today's world if New Coke had been as successful on its first attempt.

My thought on this review.  If the Focus Electric were my teenage daughter, and automobile mag a would be suitor, that date would be a no-go.  :)

The Focus Electric offered good power under most circumstances and enough torque to spin the inside front wheel accelerating into corners.

On the Volt the traction control is so tight that just at the moment the wheel starts to spin the TC kicks in and controls it.  On the Leaf, Nissan lets it spin for what feels like half a wheel before it kicks in, as if to say "yeah, it could spin the wheel if we would let it."  Curious to see how Ford would address the can this thing spin a wheel vs. traction control equation.  Looks like they opted for the, "let them know it CAN spin the wheel" option.

It's clearly heavier than a gasoline Focus, which makes it feel clearly planted on the road. Pickup is good away from stops, but we occasionally wished for more mid-range torque in the 35-to-60-mph range

Most reviewers are liking the feel that the extra weight brings to the equation.  Except of course for Edmund's who described the car as "slow witted."  Lack of mid-range torque is an issue with the Leaf and the Volt to some degree and is perhaps a fact necessitated by a single gear drive.  The solution would perhaps be to have multiple gears but the problem is electric motors are more efficient at higher RPMs  so on the other hand you want this thing spinning crazy fast.  Its very early days on transmissions for electrics.

It's still a compact hatchback, but it's one made of very nice materials--and it gives a more upscale feel than the slightly Spartan Leaf.

Not to mention that it dances circles around the Leaf on electronics and connectivity.

The main question in the minds of buyers and industry observers is not whether Ford can build a decent offering. The company's done that.  It's whether or not the Focus Electric will be offered throughout the country, in volumes that will enable any buyer who wants one (and can afford the $40K price tag) to step up and buy it.  Its main competitor, the Leaf, will now be available for immediate purchase at selected Nissan dealers nationwide: no more online signup and waiting.

Yup, Ford says they are ready to make as many as customers demand, but it is the Dell model of production, and that is not how most people buy cars, will be interesting to see if Ford sticks to its guns on that production model.

Ford feels that the faster charging, standard equipment level, and sportier vehicle dynamics of the electric Focus make it worth more than the high-level Leaf.

According to Edmund's, true market value the price of the Nissan Leaf SL is $38,755 with destination.

The MSRP of the Ford Focus Electric is $39,995 with destination, some people have managed to get prices lower than MSRP on the Focus Electric.  Most reviewers are comparing the Leaf SV price which is lower, but the fact is that greater than 90% of Leafs sold are the more expensive SL model.  I would pay the extra grand for the Focus Electric just based on its styling.  Throw in liquid heating/cooling of battery, double recharge rate, and vastly superior electronics/connectivity and from where I sit it is a no brainer.

Viera says Ford is "making a profit" on the electric Focus--despite his CEO's claim that the battery pack cost is $12,00 to $15,000--so perhaps there's room for some creative price-cutting in the future.

Typically a manufacturer has to sell units in the six digit range before they make up all their costs for creating and launching a vehicle.  Ford's start up costs on the FFE have been minimal, but it is hard to believe they are making profit from job 1.  Still there is no doubt Ford will hit the first profitable unit well before its competitors based on their production method.

This strategy closely mirrors what Samsung is doing with its mobile devices: If you have the ability to make every possible combination, you theoretically create the best chance of connecting with consumers of all tastes.

What I like about this review is that no where does the author concern himself with actually writing about driving the car.  Instead Jesse talks only about the technology available in the car and how the owner can connect with it all.  It is understandable.  The Focus Electric really does raise the techno bar.

The cool/creepy factor came into play when Donna Bell, manager of electric vehicle  infrastructure and smart grid technology at Ford, showed off the remote starting function.

Not sure what's creepy about that.  Its 4:45pm and 22f outside, and your Focus Electric is in the parking lot, colder than ice.  You pull out your phone, and tell the car to preheat the cabin to 72f.  When you slip into the car at 5pm its warm and cozzy.  Or try this scenario on for size, since Ford has opened up the possibility of apps working the SYNC system.  Busy trying to wrap up some things before you head home for the weekend you forget all about the cold snap that came through this morning.  But an app that you downloaded notes that the temp is below a threshold level you set and so sends you a text message at the time you appointed and asks "The temperature outside is 36f, shall I preheat the Focus Electric to 72f?"  You smile, tap on "Y" and wrap things up before heading out to the toasty cabin of the Focus Electric.

The Focus EV is one of the most advanced vehicles we’ve laid our eyes and hands on. The amount of tech the Blue Oval has managed to pack into this five-door hatchback is simply stunning. And the fact that you can pick one up for less than $40,000 is the icing on the electric cake. While the vehicle’s limited range may not be for everyone, it will almost certainly meet and exceed the needs of a wide swath of the population.

This review was notable for its lack of any notable quote.  It was almost as if R&T was trying to say, we aren't going to commit to any comments on this thing until we can drive it around for me than a day.  Probably a smart attitude for a car journalist to take.

At this point, with the notable exception of Edmund's, the reviews have been quite positive.  The Ford folks have to be happy with the feedback they are getting so far.