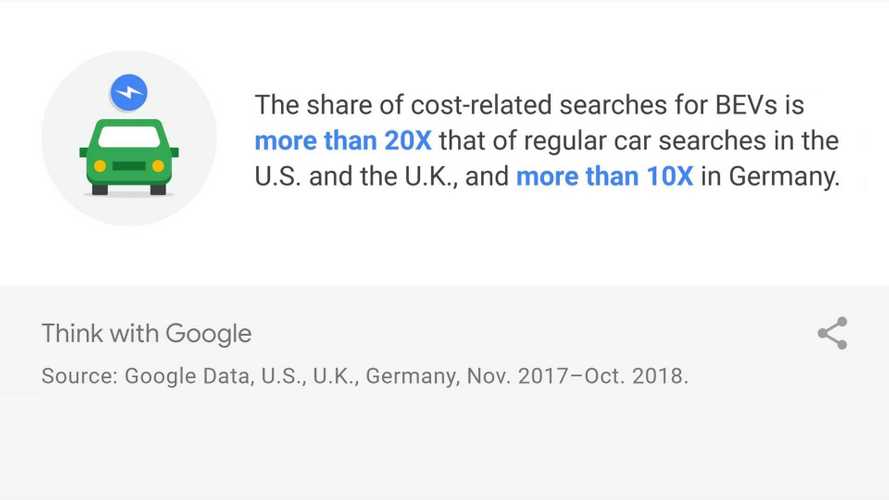 Two of them we already saw coming. The remaining one was completely unexpected.

"Ask Google" is something people now say whenever they want to know more about anything. The tech company knows that and has created a team of Human Truths back in 2015. What they do is understanding people's diffuse concerns and translating them into more approachable ideas. The Google Human Truths Team made that with EV adoption and discovered three main roadblocks in its way. While two of them were not new to us, the one that is is a complete surprise.

By cost, Google means everything involved with it. Higher prices than those charged for combustion-engined cars are just the tip of the iceberg. Depreciation, battery replacement prices, and charging costs are part of the package, and we have mentioned these aspects more than once.

Jason Klein and Joonsu Yang, the authors of the study, suggest that automakers willing to boost EV adoption must make an effort to show how electric cars can present advantages. An online cost comparison tool is the example they give of a useful way to convince customers to switch to EVs. The problem with that is that, apart from a few manufacturers dedicated to electric cars, all other companies still have ICE-powered products to sell.

For the companies that do not have this conflict of interest – and are genuinely interested in promoting rather than damaging EVs – must also ensure the cars they are selling will not become expensive paperweights when their battery packs need a replacement.

The Google Human Truths says the second barrier EV adoption to be overcome is reliability, but that word does not give an accurate sense of what they mean. After all, EVs are much more reliable than combustion-engined vehicles. They do not experience as many problems as the other cars do. If they can take our suggestion, we'd say the issue is dependability, in a sense that owners do not know if they can count on these cars.

That is related to range anxiety, but not as we usually see it. With larger battery packs, EVs can cover the same distance most cars that burn fuel also can. The issue is not being able to get energy at the same speed these fuel-burning machines can.

Let's suppose you have an emergency and have to go anywhere farther than you had been planning and you know you lack enough charge to get there. Or, that you forgot to charge for some reason. What do you do?

While our audience knows planning and fast charging are possible solutions, people that are not familiar with that see this as a significant hindrance. Worse than that: there are places with no fast charging network, such as Portugal. Swappable batteries, like the ones proposed by NIO or Toroidion, could also be a solution for more convenience.

The last and most surprising struggle for EV adoption is safety. Yes: people think electric cars are unsafe, according to Google. And that even though Tesla vehicles perform really well in crash tests.

The explanation for that is that people associate EVs with "emerging technologies, such as self-driving cars." Ironically, that can be mostly credited to Tesla Autopilot and Tesla Smart Summon, two of the most prominent autonomous technologies currently available.

Although Autopilot has proven to be useful and life-saving in many situations, Google's research indicates the public is not aware of that. Accidents in which it is pointed as the cause – and proven innocent – and the fact that it is still in beta testing give clients unfamiliar with it the impression that it is dangerous.

There is no autonomous car currently for sale, and there will not be any for a long time. Autopilot does not drive the car unless in very limited conditions. Even if it eventually reaches level 4 autonomy, the owner will be able to choose to use it or not.

This is something only more knowledge will be able to tackle. If EV adoption is stimulated by solving the cost and dependability roadblocks, this last one should naturally disappear. Perhaps automakers will listen to Google more than they have listened to us. We'd rejoice if they did: the deal is to spread the message, whoever the messenger is.