Insuring any premium luxury car can prove expensive. How about a state-of-the-art battery-electric car with innovative technology? Tesla has made it clear that at least some insurance companies may be charging a high premium for folks to insure its vehicles.

The solution? Tesla has decided to begin offering its own internal insurance program, with promises of some 20-30% in savings. Based on new information gleaned via ValuePenguin.com, the savings may not be as advertised, at least for some people. The report states:

"Tesla's policy sold through State National charges an average of $2,965 for a 30-year-old male driving a 2019 Tesla model 3. That's 22% cheaper than the statewide average for a new Model 3. However, GEICO, AAA of Northern California and Progressive all had more competitive rates."

The following chart breaks it all down for us:

The above analysis begs the question of whether or not Tesla can stay true to its offering of auto insurance rates that are truly 20-30% cheaper. According to ValuePenguin.com, Auto Insurance Analyst Mark Fitzpatrick asserts that the Silicon Valley automaker has not yet delivered on its promise.

Still, while some people say their insurance has come out less expensive by taking Tesla's option, many are reporting that Tesla's quotes are higher. Apparently, this all depends on your personal situation, as well as what company you are paying for your current car insurance. 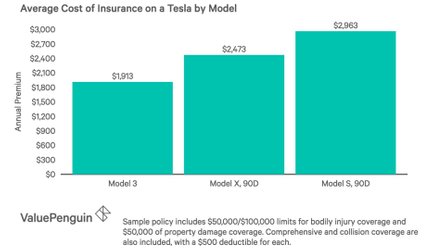 How Will Tesla Insurance Manage To Be Cheaper Than Other Policies?

Researching further shows that while Tesla CEO Elon Musk said that rates will be lower since the company is aware of the "risk profile" of its customers, it's reportedly not using telematics to assess driver risk. Other insurance companies are working to lower rates by using such technology to track driving habits and giving bonuses/discounts for "good" driving.

This may be due to Tesla's "always online situation," data gathering, built-in dashcam, etc., meaning it already has the ability to create such data? We really have no way of knowing.

"When I reviewed filings with the California Department of Insurance, I found that Tesla's new insurance discounts are closely tied to the car’s level of autonomous driving capability, and will only apply the user's policy's liability, MedPay, and collision coverage portions. Tesla drivers will be eligible for a good driver discount of 20% if they have no tickets or at-fault accidents in the past three years. That discount increases to 35% if they have no accidents or tickets in the last five years. This isn't unique to Tesla Insurance as several insurers offer good driver discounts. While it is entirely possible that Tesla can offer significant savings, It is not clear if current Tesla users will be able to take advantage of them immediately. However, I believe Tesla will tweak its insurance program before rolling it out nationally."

At any rate, it seems that proof is yet to be determined. You can via ValuePenguin's complete report by clicking on the source link below.

Have you opted for Tesla car insurance? If so, we'd love to hear from you in the comment section.