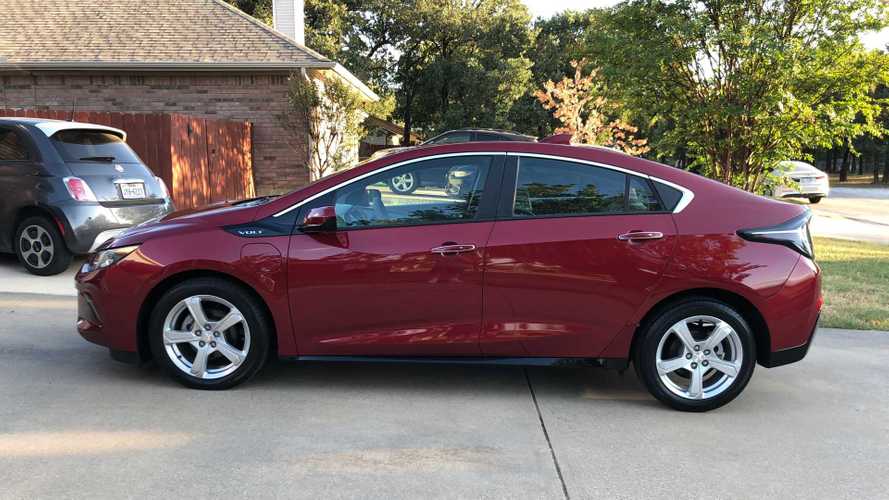 The Volt is a compelling choice. It's sad it was discontinued.

In my household, we had four EVs already: a Tesla Model 3 LR, Chevy Bolt EV, Fiat 500e, and Prius Prime Advanced. Even though we only have three drivers in the household, we usually rent some of these cars out on Turo, which I’ve written about before. And, just so you know where I’m coming from in terms of EV experience, we have also owned several Chevy Volts, a BMW i3 Rex, and two different Nissan LEAFs.

More "What Do I Drive" Stories:

My wife recently broke her knee and had surgery to repair it.  As such, her knee hurts a lot and she has found that for driving, the Tesla is the most comfortable for her knee. This is ironic being that she specifically wanted the Bolt EV because it sat up higher like her i3, and she did not care for the seating position of the Tesla Model 3.

Nevertheless, this is the situation now and thus she has been driving the Model 3 most days.  That leaves me driving either the Bolt or the Prius Prime. Well, I actually preferred the Prius Prime. Sure, it’s a bit sluggish and the EV range of 25 miles isn’t fantastic. But, oddly enough, I still manage to drive in EV mode 95% of the time with it.

Even though I had bought the Prius Prime mostly for Turo, I have actually grown rather fond of it, both inside and out. The exterior seemed weird at first, but it really grew on me. And, I also found the car just really comfortable to drive and loved the large touch screen in the middle.  However, as you can see by the photo here, we were recently driving it and were involved in an accident where we were t-boned.

The insurance company informed me a few days ago that the car has been declared a total loss.  And before I move on, I would like to give a big thumbs up to the safety systems in the Prius. It held up really well in the accident. My wife, who was riding in the passenger side, received minor injuries in the crash, but the side-curtain airbag saved her from any serious injuries.

So, I’ve been stuck driving the Bolt EV. Sure, it’s actually a really solid car and there are a lot of things to like about it. But, it’s just not “me.” I grew up driving sports cars like Firebirds, Ford Probe, Mitsubishi Eclipse, and so forth. Thus, I’m still the kind of person that likes a car that sits low and is at least a little bit sporty. I realize I’m not in the majority with that desire, but it is who I am.

Additional "What Do I Drive" Features:

My first priority for picking a car is that it must be a plug-in car of some kind, preferably a BEV.  My second priority is that it be a sporty car.  While the Prius Prime probably doesn’t give anyone a “sports car” vibe, I feel it is much closer than something like a Chrysler Pacifica Hybrid for example.

I’m also not willing to go back to a car with a super-limited range, so that rules out something like a used Focus EV.  I’m also not willing to pay for another Tesla. Cars like the Kia Soul EV, Kona EV, or any of BMW’s EVs or PHEVs just really don’t do it for me. I will not buy another LEAF here in Texas until I’m satisfied their passively-cooled batteries will hold up in our hot summers. It may be years until we know the answer to that and I'm not willing to take the risk again. I got burned twice already with LEAFs.

So, for several days, I kept staring at the EV sales charts on this very website just looking at the different cars that are available. The fact of the matter is, for the criteria I have given myself, there weren’t really a lot of cars to pick from.

This left me honestly considering another Prius Prime, but then I started thinking about a 2019 Volt. I had a 2017 that I traded in for the Tesla about a year ago. I really liked that car. I knew the 2019 Volt had received many nice upgrades like 7.2 KW charging, power seats, and a better infotainment system. And while the Volt is a PHEV, it is definitely the best PHEV ever made. It had enough range and performance that it could, for all intents and purposes, be driven like an EV day in, day out. Sure, you still need the gas engine for those out-of-town trips, but, in town, for daily life, it’s an EV.

There’s only one problem. They discontinued it and there aren’t any on any dealer lots. Even if there were, I felt strange buying a brand new car that has just been discontinued. So, I asked myself why. I couldn’t really think of a good reason. GM still has to warranty the car and provide repair parts and services for 10 years, and it’s still the best PHEV ever made.

So, I tried doing searches to see if there were any used 2019 models available. As you may have guessed, there weren’t any. However, when I widened my search, I found some new ones still on the lot at several rural Chevrolet dealers, usually a few hundred miles away. What made these even more interesting is they were heavily discounted, some as much as $10,000 off of the MSRP. This piqued my interest.

Still More "What Do I Drive" Articles:

So, I called up Buzz Smith, the EV specialist at Classic Chevrolet here in the Dallas area. I have bought two cars from him already in the past. I asked him if there was any way he could get ahold of one of these brand-new 2019 models. And, actually, he could.

The main problem was that the pickings were thin. It would be nearly impossible to find one with all of the features and color combinations I wanted. Buzz managed to find about 10 of them available within a 300-mile radius. I eventually picked one, and they had an employee go pick it up. I ended up getting just about everything I wanted, but I did have to settle for Cajun Red, which isn’t really my first choice for colors. But hopefully, it will grow on me. If not, I can always get it wrapped.

The amazing part is, this was a rather well-equipped car, with an MSRP hovering right around the $40K mark. With all of the GM incentives, plus my dad’s GM discount, plus the federal and state incentives still available, I ended up paying around $23,000 for a brand new 2019 Volt. And yes, it is discontinued, but it is still a great car.

With 53 miles of EV range, combined with that 7.2 KW charger, I should be able to easily do round trips of around 100 EV miles as long as I don’t mind being at my destination for two hours.  I know this will ruffle some feathers, but I honestly feel it is a more solidly built car than our Tesla Model 3. Granted, ours Model 3 was one of the first ones built, so many are much better now.

The moral of the story ... If you want a really great PHEV, there are still some brand new 2019 Volts out there to be had if you look for them, and the discounts make it an unbelievable deal!