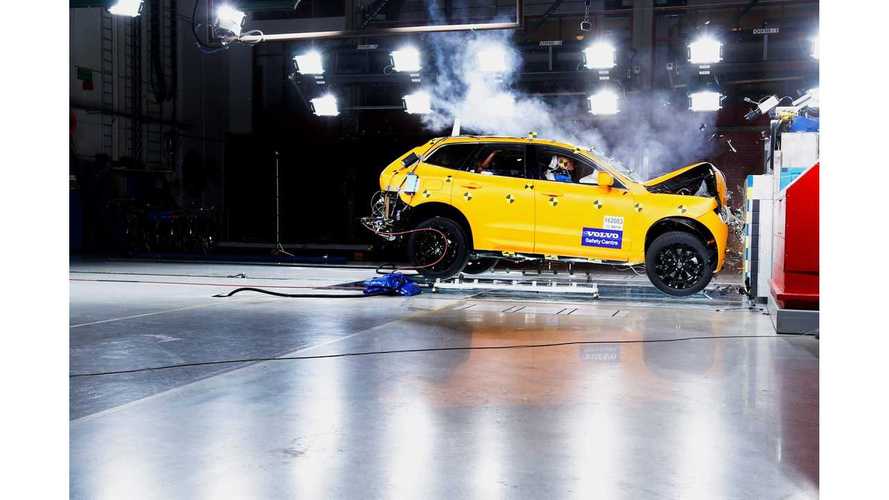 Read about the safest plug-in cars on the road today according to the IIHS and NHTSA, as well as each vehicle's standard and available active safety equipment.

This is the second article in a two-part series about the safest plug-ins available today. We factor the most up-to-date crash testing ratings from the Insurance Institue for Highway Safety and the National Traffic Highway Safety Administration. We also fill you in on each vehicle's standard active safety technology, as well as what other safety features are available.

If you haven't read 'Part One' or are unfamiliar with IIHS and NHTSA crash testing procedures and ratings, follow the link above. Keep in mind that many of these vehicles aren't individually tested in their "electrified" trims. In most cases, the scores for the gas-powered configuration are used for all variants. Additionally, most consider the EV and PHEV versions of any vehicle to be arguably safer due to increased weight and/or lower, more balanced center of gravity.

Now, let's get right into our list of the safest plug-ins.

The Pacifica Hybrid hasn't yet been rated by the NHTSA, but the comparable gas-powered Pacifica gets a five-star overall rating, with four stars in the rollover evaluation. The IIHS designates it as a Top Safety Pick. It earns the bests rating of Good in all categories.

According to the NHTSA, the BMW 3 Series receives a five-star overall rating, although it falters marginally in the frontal crash test, earning four out of five stars. Nonetheless, it receives only Good crash test ratings from the IIHS and is a Top Safety Pick.

The A3 earns a spot in the Top Safety Pick club, with the highest rating of Good in every IIHS crash test. The NHTSA specifies that the Sportback model hasn't been tested. Other A3 models get five stars overall, despite only four stars in the frontal crash and rollover tests.

The IIHS awards the XC60 with nothing but Good ratings for crashworthiness. It's also a Top Safety Pick. The NHTSA hasn't tested the 2018 model. Even though the 2017 model received a five-star rating, the SUV was completely redesigned for 2018, so we can't assume those scores will stand ... but we're confident the Volvo will fare well.

If you want even more features, you can opt for a 360-degree camera, rear collision warning with braking, cross-traffic alert, blind spot monitoring with steering assist, a distance alert, adaptive cruise control, and semi-autonomous drive.

The IONIQ Hybrid (no plug) aces all IIHS crash tests and is a Top Safety Pick. However, the EV and PHEV have yet to be individually tested. The NHTSA hasn't tested any version of the IONIQ for 2017 or 2018.

The NHTSA has not evaluated the Cooper Countryman. According to the IIHS, it earns a Good rating in every category. However, it misses the Top Safety Pick designation due to a Marginal headlight score.

Every Cooper Countryman comes standard with rear parking sensors and a rearview camera. You can opt for more advanced safety features, including a head-up display, a driver drowsiness monitoring, park assist, and adaptive cruise control.

The XC90 performs very well in all NHTSA crash tests, earning it a five-star overall rating. Like almost all SUVs, it receives four stars in the rollover simulation. It also secures a Good rating in every IIHS evaluation, but it can't take home a Top Safety Pick honor since its headlights are Marginal in some trims.

The GLE is an IIHS Top Safety Pick. The NHTSA has only evaluated its rollover probability, and in that test, it earns four stars out of five.

Standard safety features in the GLE 550e include a rearview camera, crosswind assist, a driver drowsiness monitor, lane keep assist, blind spot monitoring, forward collision warning, and Mercedes' Pre-Safe, which readies the car for a crash by closing the windows and sunroof, tightening the seatbelts, and locking the doors. You can opt for extras like a surround-view parking camera, parallel park assist, and adaptive cruise control.

According to the IIHS, the S90 gets Good ratings for crashworthiness in all areas tested. Its Marginal headlight score robs it of the Top Safety Pick designation. It has yet to be tested by the NHTSA.

If you want more, you can add a 360-degree camera, adaptive bending headlights, a head-up display, front parking sensors, and active park assist.

This list will continue to change as we gather new information on certain models. We will update and republish 'Part One' and 'Part Two' as new details become available and when new models arrive.

The bottom line is that there are many plug-in cars that perform well in crash tests, and most come standard with a respectable list of active safety technology. If you can afford to spend the money, many of these vehicles offer an impressive list of optional advanced safety equipment.