2018 Mitsubishi Outlander PHEV Arrives At U.S. Dealerships, Here's One For $6,365 Below MSRP 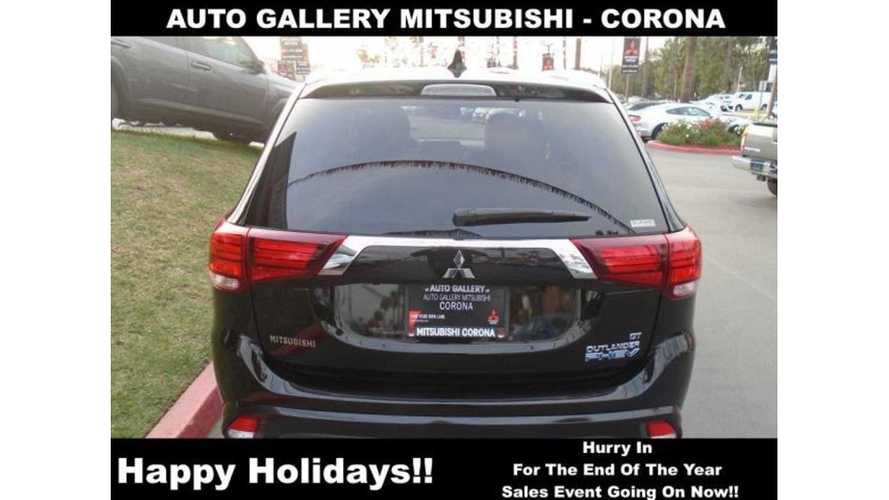 After repeated delays, the Mitsubishi Outlander PHEV has finally arrived at U.S. dealerships and it's already being heavily discounted by at least one dealer.

Mitsubishi has come through this time by just squeaking in before the deadline. The automaker last told us the following:

“The all-new 2018 Mitsubishi Outlander Plug-in Hybrid Electric Vehicle (PHEV) will arrive in dealerships in December 2017 starting at the MSRP of $34,595.”

With just days left to spare, the Outlander PHEV is here.

A quick glance nationwide on Cars.com reveals there are quite a few Outlander PHEVs available (mostly out on the West coast). However, one in particular caught our eye. It's one of only a couple where actual images of the vehicles are posted, rather than those stock photos which usually indicate the vehicles are still in transit.

Listed for just $35,490, this particular Outlander PHEV is the uplevel GT version and it's some $6,365 below MSRP.  Here are some pics:

This particular Outlander PHEV is located in Corona, California. It's a sweet deal as it's actually priced more in line with the non plug-in version of the Outlander GT (listing details here).

We still don't have official EPA figures for the Outlander PHEV, but here are Mitsu's estimates:

Additional details, as well as a build-your-own Mitsubishi Outlander PHEV walk through can be found here.