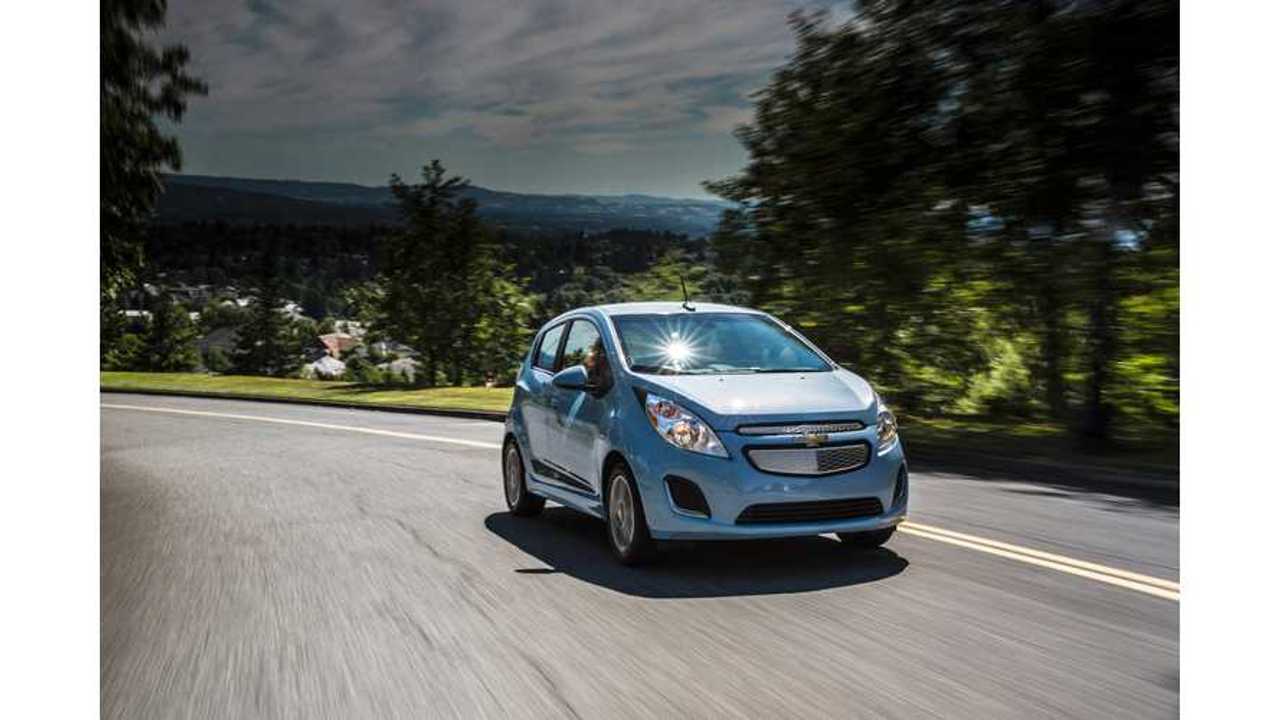 CarsDirect included five plug-in cars on its list of Best Green Car Deals For May 2015.

For sure one of the best offer is on the 2015 Chevrolet Volt, which will be replaced by 2016 version later this year. Volt qualifies for $7,500 federal tax credit and $1,500 California Clean Air Rebate & HOV Lane Access.

"Chevy keeps improving the lease on the Volt. A big redesign is due later this year and the automaker is hoping to move remaining stock of the current generation. The monthly payment is now $249, a $50 drop compared with early last month. Most impressive is a low $500 due at signing to get your lease started. There is currently no better deal on a plug-in hybrid. Note this offer is valid in the following states: CA, CT, MA, MD, ME, NJ, NY, OR, RI and VT."

Then we have four all-electric models, which all qualify for the $7,500 federal tax credit and $2,500 California Clean Air Rebate & HOV Lane Access.

2015 Chevrolet Spark EV already showed great performances in California and Oregon, which is the best proof that the current offer works.

"Although the Spark EV is only sold in California and Oregon to meet state emission mandates, it’s also the best deal on an EV. Thanks to a price cut and substantial discounts, you can lease one from $139 per month with zero due at signing. No, that’s not a typo. The 82-mile driving range is slightly lower than competitors, but you also get a car with 119 MPGe, making it one of the most efficient cars available. The FIAT was our previous top pick, but the lease payment was hiked to $169 and it requires thousands in upfront costs."

Then we have the 2014 Mercedes-Benz B ED, which could be leased beginning at $0 due at signing.

"It might not be the greenest option but the B Electric is one of the few luxury EVs with a $0 due at signing option. While most of the Mercedes-Benz lineup has shifted to 2015 models, the latest B Electric has been slow to arrive. You could lease a 2015 model but you’d also be paying $124 more per month. Most shoppers don’t know the B Electric is powered by a Tesla battery that makes it one of the best-ranking EVs in terms of driving range with 87 miles."

2015 FIAT 500e has a relatively attractive $169 lease, although not as attractive as earlier.

"The FIAT 500e is no longer the best value when it comes to EV leases. A payment hike of $30 for May is unfortunate news for shoppers who were attracted by the $139 lease that has been advertised for months. However, it still ranks as a top pick thanks to $7,500 in lease discounts. A driving range of 87 miles is remarkably good compared with similar cars. Note that the 500e is offered only in California and Oregon so that Fiat-Chrysler can meet zero-emissions mandates."

"The e-Golf has higher upfront and monthly costs compared with other EVs but it continues to be a lease value. A staggering $11,750 in unadvertised lease discounts brings the payment to $229 per month on the Limited Edition. Not sold? Consider that the e-Golf is based on the award-winning Golf and has more passenger and cargo volume than the Spark EV and FIAT 500e. An 83-mile driving range is lower than competitors but 116 MPGe means you’re getting one of the most efficient cars available. Note that availability is limited to select dealers. Known regions include: CA, CT, DC, MA, MD, ME, NJ, NY, OR, RI, and VT."

If you are interested in leasing, CarsDirect offers a custom lease quote too.